Airbus to scrap production of superjumbo A380 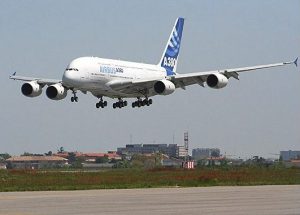 A380 prototype on its maiden flight. Photo: courtesy Airbus.

Airbus will cease production of its superjumbo A380 as a result of dwindling orders and a recent decision by Emirates, the Dubai-based airline and largest A380 customer, to cut its order from 162 to 123 aircraft.

As a result of the decision by Emirates, and given the lack of backlog orders with other airlines, Airbus will cease deliveries of the A380 in 2021.

According to Airbus chief executive Tom Enders, the order cut by Emirates, together with “no substantial A380 backlog” made continued production of the A380 unsustainable.

The spacious jet, which had its first commercial flight in 2007 with launch customer Singapore Airlines, was hailed as a technological marvel that would meet the needs of airlines for large aircraft to connect the world’s largest airport hubs—London, New York, Dubai, Tokyo.

The product of a multinational effort by France, Germany, the U.K. and Spain, the A380 proved expensive to build, partly because production was spread across various locations.

“What we’re seeing here is the end of the large, four-engine aircraft,” said Enders.

The future success of Airbus now very much depends on its new generation of aircraft.