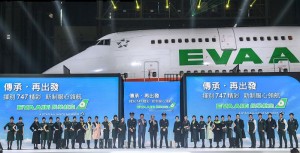 The retired 747 jumbo jet is a backdrop to the catwalk on which EVA Air’s new uniforms were unveiled.

In a dual celebration held in August, Taiwan-based EVA Air bid a fond farewell to its Boeing 747-400 passenger aircraft and an enthusiastic welcome to the debut of staff uniforms.

EVA positioned its retired jumbo jet in the hangar as a backdrop for the catwalk used to reveal the third-generation uniforms.

Boeing 747-400s formed the backbone of EVA’s long-haul fleet through the airline’s early growth and development. The airline took delivery of its first two 747s in November 1992 and used them to launch long-haul routes from Taipei to North America and Europe. During almost 25 years of service, EVA flew the aircraft to 28 destinations in its flight network, laying the foundation for its ongoing expansion.

EVA’s third-generation uniforms, designed by Taiwan luxury fashion house Shiatzy Chen, will be rolled out this November, approximately two years after it first began development on them. 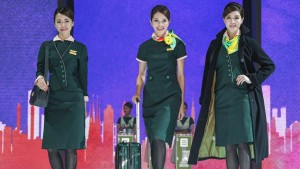 Verdelite (green-coloured tourmaline) was the base colour chosen for EVA Air’s third-generation uniforms.

Scarves set the new uniforms apart from the current ones. The colourful pattern in the scarves was inspired by the steady growth of trees, symbolizing EVA’s own continuous development and corporate spirit.

Uniforms for male ground staff are built around the three-piece business suit concept. Aircraft wings formed by green or orange dots stand out against the background of the uniforms’ black ties, capturing the idea of EVA’s global network. Vests feature pockets where service staff can keep pens and notebooks at their fingertips to jot down passenger information and specific requirements.

EVA further ensured the comfort, functionality and versatility of its new uniforms by commissioning a fabric supplier to develop a high-performance material that blends elastic and antistatic carbon fiber yarns. EVA’s special fabric is quick drying and moisture absorbent, retaining flexibility and high breathability so that service staff can move and work comfortably in addition to looking and feeling good while they attend to passengers.