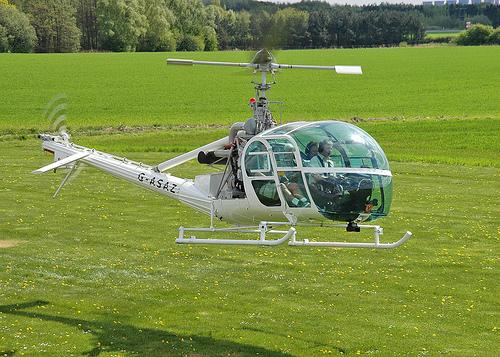 Pussy Galore’s helicopter from the movie “Goldfinger” will be the 2014 “Spirit of Aviation” star at Goodwood.

The helicopter made famous by Pussy Galore in the 1964 James Bond Film Goldfinger will take centre stage at the Freddie March Spirit of Aviation exhibition at this year’s Goodwood Revival to be held on September 12.

The flying machine, officially known as the Hiller UH-12E4 is the very aircraft in which Galore, played by actress Honor Blackman, flew Goldfinger’s atomic bomb to Fort Knox for the film’s finale. It was also used by Elizabeth Taylor and Richard Burton in Oscar-winning film, The VIPs, the previous year.

Up to 30 aircraft will form part of the display with other highlights including a 1948 Tempco Globe Swift GC-1B whose previous owner’s father was taught to fly at 14 years old by aviation pioneer Wilbur Wright—and even had the latter’s signature on his licence.

Iron Maiden frontman Bruce Dickinson is set to bring his Fokker DR1 triplane, the same kind of machine used by German World War 1 hero Manfred von Richthofen, aka, The Red Baron, while the largest machine this year will be a Douglas C47A Dakota.

Two very rare Austers will be on-site, a ‘5’ that was used in the D-Day landings of 1944 and a J1, which completes the line-up of the Leicestershire-built machines.

Beechcraft’s presence is marked by a pair of twin-engined aircraft, an E18S and a BE-50 Twin Bonanza, while de Havilland, Cessna, Percival, Piper and others will be represented as well.

“Every year we gather an amazing selection of aircraft together for the Freddie March Spirit of Aviation exhibition, but this year’s is truly the most impressive to date,” said Rob Wildeboer, Goodwood Aviation general manager. “We have famous aircraft and some extreme rarities that will appeal to both the true aviation enthusiast and those looking to get up-close to something pretty special.”