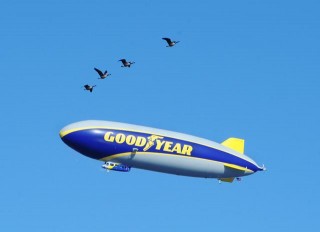 The Goodyear Tire & Rubber Company’s newest blimp took to the skies on Monday March 17, 2014, for its maiden flight. Aided by a tail wind, the blimp’s speed on its maiden flight eclipsed 128 kilometres per hour.

The test flight was part of a comprehensive training program Goodyear pilots and crew will undergo over the next two months.

The new blimp will officially be ready to begin travelling to cities around the United States after a formal christening ceremony this summer.

The blimp is an all-new, state-of-the-art version that is larger, faster and more manoeuvrable than previous models and builds on the company’s legacy as the world’s leading builder and operator of airships.

It is the first of a new generation of Goodyear blimps that will be different in construction, appearance, and operation than the current fleet of blimps. The new helium-filled airship is 74 metres long, more than 15 metres longer than the previous blimps and just 16 metres shorter than an American football field.

The blimp features a new paint scheme that retains Goodyear’s logo and traditional blue-and-yellow branding on a silver envelope.

A new interior with seating for up to 12 passengers and improved viewing through larger wrap-around windows, which provide sweeping panoramic views, adds to the ride’s comfort.

The Goodyear airship incorporates the latest in on-board avionics and flight control systems. Whereas pilots of the previous generation of blimps controlled the airships’ movements with a manual flight system in use since 1925, the new ship features custom computer-controlled avionics. Electronic controls work in conjunction with an on-board computer to regulate engine thrust, up-and-down movement, and right-and-left movement. Tail fin operation will be controlled by a joystick device. These advancements result in more precise operation of the airship while in flight, on landing, and on take off.

The new airship has a top speed of 117 kilometres miles per hour, compared to the current maximum of approximately 80 kilometres per hour, giving the blimp greater range to cover more events.