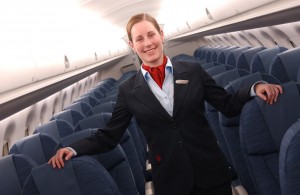 Air Canada inflight attendant—The airline has filed an application with Transport Canada to reduce the number of flight attendants required on its narrow-body aircraft, similar to an exemption its rival, WestJet Airlines Ltd., received in 2013.

Transport Canada has granted exemptions to Sunwing and WestJet.

The federal government also announced its intention to change the existing regulation, which would allow other Canadian airlines to switch to a ratio of one flight attendant for every 50 passenger seats.

CUPE has asked the Federal Court for a judicial review of Transport Canada’s decision to grant an exemption to Sunwing—CUPE represents Sunwing’s 1,000 flight attendants.

“The criteria set out in the Aeronautics Act in order to grant such exemptions were ignored by Transport Canada,” said Paul Moist, national president, CUPE. “Granting exemptions to Sunwing and WestJet is clearly not in the public interest because it compromises the safety and security levels currently in place.”

In July, 2013, CUPE asked Air Canada to withdraw its request for an exemption from the ratio requirements.

With the matter now before the courts, CUPE said that the government must put exemption requests by Air Canada and Air Transat “on ice.”