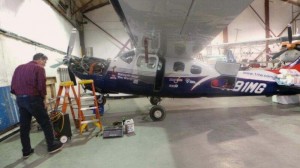 The single-engine aircraft in which Captain Tan will attempt to fly solo around the world in 50 days.

On March 26, 2013, Malaysian Captain James Anthony Tan took off from Langkawi, Malaysia, on a mission to be the youngest pilot to fly solo around the world in a single engine aircraft. 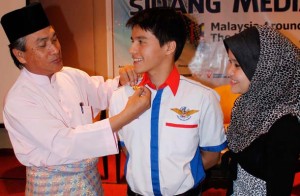 His expedition will take him across the Northern Hemisphere, visiting 20 countries with 30 scheduled stops, including a seven-city tour in the U.S. and Canada this month.

He will fly across North America from April 5-22, with stops in Anchorage, Juneau, Vancouver, Denver, Indianapolis, Teterboro, and St. Johns.

Through his expedition, Tan wants to inspire the world’s youth to explore the world. Having been born with dyslexia, he also wishes to raise awareness on the issues faced by children with special needs and empower them to chase their own dreams, no matter how impossible they may seem.

Upon the successful completion of his expedition, Tan will not only be the youngest pilot to fly solo around the world in a single-engine aircraft, but will also be the one to do it in the shortest duration among the youth record holders of this category, recognized by the World Record Academy.

He has already been inducted into the Malaysia Book of Records for his previous expedition of 24,076 kilometres from the United Kingdom to Bangkok and back, completed in 2012.

For more information on 1Malaysia Round the World and to track Tan’s journey, visit 1rtw.com.my.