Signing on to Giving Pledge 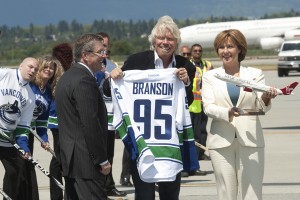 Sir Richard Branson, who founded his company in 1971 with a record store in London, has transformed these humble beginnings into the Virgin Group, a multinational corporation with interests in air travel, media and space tourism.

However, Sir Richard’s latest initiative has nothing to do with acquiring businesses but instead giving half of his estimated $4-billion dollar fortune away.

Sir Richard has joined the Giving Pledge initiative founded by Warren Buffet and Bill and Melinda Gates in 2010 to convince the world’s richest people to donate at least half of their wealth to charity.

“‘Stuff’ really is not what brings happiness. Family, friends, good health and the satisfaction that comes from making a positive difference are what really matters,” said Sir Richard and his wife Joan in a letter.