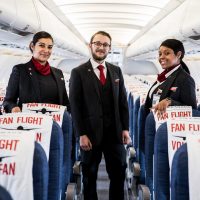 It’s that time of the year in Canada, when the puck drops on another NHL season and fans from coast to coast cheer for their favourite teams.

In that spirit, Air Canada has announced the return of Fan Flight (#ACFanFlight)—a season-long program that rewards deserving fans with a VIP game experience, including the opportunity to see their team play either at home or on the road.

Fan Flight rewards fans in several ways, including in-arena giveaways during promo nights and by flying lucky fans to away games.

It also recognizes deserving young sports fans, nominated by the Air Canada Foundation, who are making their mark in their communities, giving them the unforgettable experience of watching their favourite team play at home and away games.

For its pre-season warm-up, Air Canada undertook a range of exciting activities nationwide for the #BackToHockey season.

The airline surprised and delighted fans at airports with game tickets and gifts in September and recognized two lucky fans during pre-season games in Atlantic Canada.