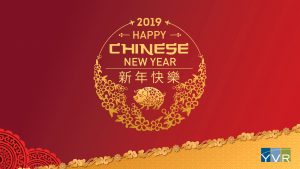 The year of the pig was ushered in on February 5 and to celebrate in style, YVR partnered with LunarFest, Canada’s premier presenter of contemporary expression in Asian arts and culture.

Also called the Spring Festival in China, the lunar new year is celebrated by more than 20 per cent of the world and is the most important holiday in China and to Chinese people all over the world.

From now until February 13, visitors to YVR will find plenty of ways within the YVR terminal to commemorate this auspicious occasion, including creative pop-ups, shopping deals and beautiful festive décor.

Weekdays at The Spirit of Haida Gwaii: The Jade Canoe and different locations post-security, YVR is giving passengers the opportunity to create and decorate their very own Chinese New Year lanterns to celebrate the year of the Pig. Passengers may choose to take their lanterns with them on their travels or have them adorn various archways around the terminal for all to see.

The terminal will also have an appearance from one of LunarFest’s Pig Heroes, part of a series of 12 cultural specialties featured at LunarFest events all throughout Vancouver.

There are also ways to save during Chinese New Year celebrations, thanks to the airport’s World Duty Free stores and UnionPay.

Not flying through YVR? You still have a chance to win! To find out how you could be the lucky winner of two tickets to Shenzhen, visit yvr.ca/cny for your chance to enter.

YVR is proud to connect British Columbia to the world and has more Chinese carriers serving destinations from Vancouver to China than any airport in North America.

YVR offers up to 60 flights per week to China during peak periods and recently announced that Hainan Airlines will now fly non-stop from YVR to Shenzhen (SZX), which will allow passengers looking to discover the region even more choice in how to do so.

These flights are a huge economic generator for British Columbia, generating tens of millions of dollars for the local economy and boosting the province’s thriving tourism industry.