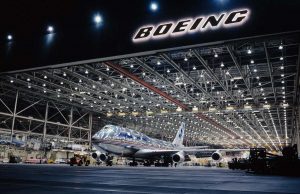 Just to produce the 747, Boeing first had to erect what was and still is the largest building by volume ever constructed—large enough to hold 75 football fields. Photo: courtesy Boeing.

One of the world’s most recognizable aircraft, Boeing’s 747, debuted at the end of what is known as the golden age of flight when travel was glamourous, and most flights catered to an elite clientele.

On Sept. 30, 1968, the first 747 was rolled out of Boeing’s Everett assembly building before the world’s press and representatives of the 26 airlines that had ordered the airliner. Over the following months, preparations were made for the first flight, which took place on February 9, 1969. 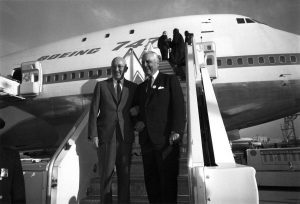 Boeing President and Bill Allen and Pan Am CEO Juan Trippe (right) celebrated the launch of the Boeing 747 “Jumbo Jet” in 1968. The long-time friends sealed the deal on selling the airplanes to Pan Am with a handshake while on a fishing trip. Photo: courtesy Boeing

Boeing designed the 747’s hump-like upper deck to serve as a first–class lounge or extra seating and to allow the aircraft to be easily converted to a cargo carrier by removing seats and installing a front cargo door.

During its reign as “Queen of the Skies,” the mighty 747 became the world’s most recognized aircraft.

While most commercial airliners have decommissioned their 747 aircraft, they will continue to be seen flying as freighters—UPS purchased 14 747-8F freighter aircraft in 2016, making it the largest operator of the 747-8 worldwide.