Cargo traffic to double in 20 years, according to Boeing forecast 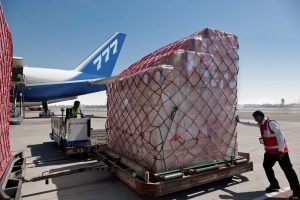 Boeing projects air cargo operators will need more than 2,600 freighters over the next two decades to keep up with increasing global freight traffic, which is expected to double with 4.2 per cent growth annually.

The 980 new medium and large freighters and 1,670 converted freighters will go toward replacing older airplanes and growing the global fleet to meet demand, according to the new World Air Cargo Forecast, released by Boeing at a recent International Air Cargo Association’s Air Cargo Forum and Exhibition.

Some of the factors driving the growth in air cargo include a growing express market in China and the global rise of e-commerce, which is forecast to increase 20 per cent annually to nearly $5-trillion in 2021 according to Boeing’s analysis.

Since January 2017, Boeing has sold 128 freighters, including 80 production and 48 converted freighters.