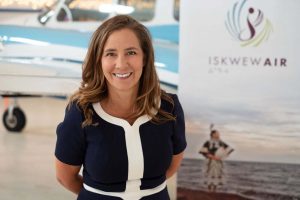 Iskwew—the Cree word for woman—celebrates the reclamation of womanhood, matriarchal leadership and language.

The welcome event, which took place at YVR’s South Terminal, featured a blessing from elders of Musqueam Indian Band, on whose territory YVR resides, along with comments from Iskwew Air CEO Teara Fraser and YVR South Terminal superintendent John Buckle.

Fraser, 47, a Metis whose family is from Chipewyan, Alberta, has been a pilot for 15 years, previously flying to towns such as Masset and Prince Rupert for Hawkair, a Terrace-based regional airline.

Starting in March 2019, Iskwew Air will be operating charter service out of YVR’s South Terminal and will also provide short-haul flights to specific destinations.

Committed to supporting women in management, YVR is looking forward to partnering with Iskwew Air and sharing in its success.