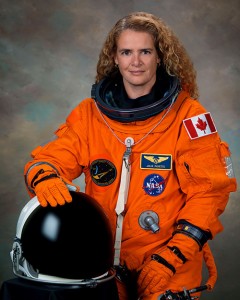 The 53-year-old trailblazer began her career as an astronaut in 1992, when she was selected from more than 5,000 applicants to become one of four astronauts chosen to join the Canadian Space Agency. Her preparation for space included obtaining a pilot’s license, military captaincy and deep-sea diver certification.

On her first journey to space in 1999 on space shuttle Discovery, Payette supervised the space walk and operated the Canadarm, Canada’s leading space technology innovation.

In 2009, she made her second trip to space, serving as flight engineer on space shuttle Endeavour.

She has also worked for NASA in the U.S.

The 29th person to assume the role of Canada’s Governor General, at her installation Payette appealed to Canadians to tackle “serious and pressing global issues like climate change, migration, nuclear proliferation, poverty and population growth.”