Celebrating 40 years of service to the Yukon

Air North, also known as Yukon’s Airline, celebrated 40 years of service on February 1, 2017. Founded in 1977 by Joe Sparling and Tom Wood as Air North Charter and Training, the original intent was to offer charters around the Yukon to the mining industry and flight training services. However, it didn’t take long for that vision to be expanded. 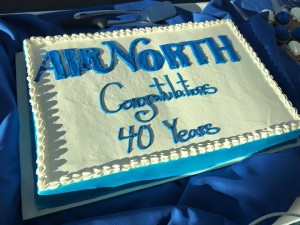 A birthday worthy of a special cake.

Starting with one single Cessna 206, by the early 1980s the fleet had grown to include a variety of aircraft on wheels, floats, skis and up to Douglas DC-3 and DC-4 aircraft. With the acquisition of the latter, the time appears right to begin offering scheduled flights within the Yukon, and into Alaska.

Just over 10 years later, two important changes began. Air North retired the Douglas aircraft in favour of Hawker Siddeley 748 turboprops and the Vuntut Gwitchin First Nation of Old Crow expressed an interest in investing in the airline. The investment from the Vuntut Gwitchin made it possible a few years later, in 2002, for Air North to purchase two Boeing 737 jets and enter a whole new era of airline service. 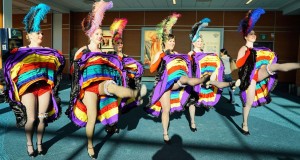 On June 2002, Air North began a regular schedule of flights between Whitehorse and Vancouver, Calgary and Edmonton. The growth was mirrored in new branding, as the airline adopted its current operating name of Air North, Yukon’s Airline.

Since then, Air North bought more aircraft and modernized its fleet with Boeing 737-400 and -500 jets, expanding its route network to include Kelowna in 2013, and a new flight connecting Whitehorse with Yellowknife and Ottawa in 2014.

The new routes have won praise from passengers for the airline’s attention to detail, service and in-flight meals, much of which is made fresh by Air North’s Whitehorse-based flight kitchen. 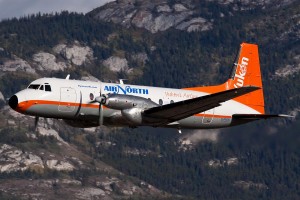 From its humble beginnings, Air North has grown to be one of the largest employers in the Yukon Territory with more than 250 full and part-time employees, as well as an additional 250+ full and part-time employees in its Vancouver base providing above and below the wing services for some of the world’s biggest airlines in addition to its own flights.

Air North also specializes in passenger/cargo charters for a wide variety of groups including sports, government, tourism, resource industries and the film industry.

President and co-founder Joe Sparling continues to be very much hands-on and connected with the airline’s passengers, captaining one of the airline’s fleet of Boeing 737 aircraft.

As Air North celebrates its 40th year of service, what does its future hold?

“We certainly have no aspirations to be a trans-continental carrier, or take on routes in the south,” said Sparling in an interview with CBC News. “All of our flying has a northern component to it. I think we have carved a bit of niche out of the market now. I think that probably the big guys know that we are here to stay.” 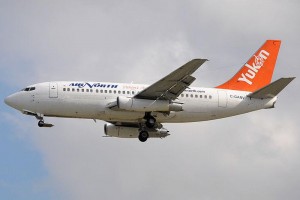