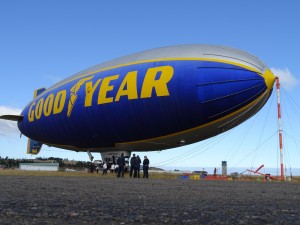 The “Spirit of Innovation” Goodyear Blimp possesses two Pusher engines, each of which delivers 210 horsepower that allow a maximum speed of 80 kilometres per hour.

As part of a North American summer tour the Goodyear Blimp returned to Canadian airspace in July, successfully touching down at the Abbotsford Airport after a few weather delays.

The visit to B.C.’s Lower Mainland by the Spirit of Innovation GZ-20A blimp was part of a continuing initiative by Goodyear to reinforce its brand with Canadian consumers.

During the blimp’s week-long stay, Goodyear customers and members of the press were able to enjoy the once-in-a-lifetime experience of flying aboard the world famous airship.

“Goodyear is proud of our history and heritage in Canada and we [were] excited to bring the Goodyear Blimp back to Vancouver to visit with existing fans and to make some new ones,” said Caroline Pajot, Goodyear Canada president. “Seeing our iconic airship on TV is one thing, but being able to connect with it in person is a whole other experience, one that people will remember fondly for years.”

The first Goodyear Blimp was launched in 1925 and since then Goodyear has generally owned and operated dozens of non-rigid airships (blimps) of various types in its global public relations fleet.

In 2011, Goodyear announced that it would replace its fleet of blimps with semi-rigid Zeppelin NT airships. Introduced in 2014, the Zeppelin is larger, faster and more maneuverable than the venerable GZ-20A blimp it will replace.

Once the Spirit of Innovation blimp retires in 2017, Goodyear’s new semi-rigid airships will, technically, not be blimps at all.