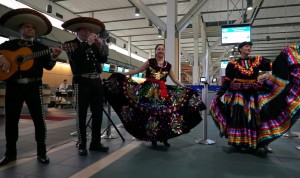 A mariachi band was on hand to celebrate the inaugural flight of Aeromexico to YVR in January, 2016. Photo: flytdeck@gmail.com

Aeromexico and WestJet, which have had an interline relationship since December 2011, have signed a new codeshare agreement.

The agreement will give Aeromexico’s customers enhanced connecting service via Vancouver, Toronto and Montreal to more than 10 Canadian destinations including Calgary, Edmonton, Winnipeg, Ottawa, Halifax, Deer Lake and St. John’s, among others.

The agreement provides WestJet guests with new connecting service from WestJet’s extensive Canadian network to Mexico City via Vancouver, Toronto and Montreal. In addition, WestJet will also now sell non-stop flights to and from Mexico City from these cities.

WestJet Rewards are available on these Aeromexico flights as well.

Both Aeromexico and WestJet will sell tickets for travel on each airline’s entire network including non-code-sharing flights, providing its respective passengers with another benefit of the enhanced relationship.

“Our airline is always looking to offer its customers the best connecting service, and this code-sharing agreement with WestJet allows it to include more destinations and flights to and from Canada to different regions of the world,” said Anko van der Werff, Aeromexico chief revenue management officer.

Bags checked with both Aeromexico and WestJet will continue to reach the final destination without requiring a separate check-in at the point of transfer between the carriers.

“We welcome this new, enhanced relationship with Aeromexico,” said Chris Avery, WestJet vice-president, network planning, alliances and corporate development. “Guests of both WestJet and Aeromexico will now have opportunities to explore more destinations than ever before.”

As a founding member of the SkyTeam airline alliance that is celebrating its 15th anniversary this year, Aeromexico offers customers more than 1,000 destinations in 179 countries served by the 20 SkyTeam airline partners, rewarding passengers with benefits including access to 636 premium airport lounges around the world.