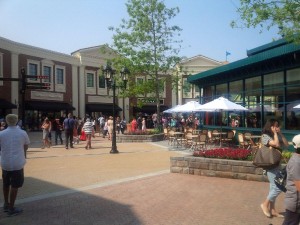 Open luxury piazza and a variety of facades create a friendly shopping atmosphere.

The designer outlet reflects a blend of European heritage and traditional Vancouver architectural style in its design, in particular the distinctive brick facades of the city’s historic and vibrant Gastown district.

Some of the world’s most iconic brands are featured, including Armani, Calvin Klein, Coach, Cole Haan, Hugo Boss, Ports 1961, Tommy Hilfiger, Nike, Polo Ralph Lauren and Tumi, with more great names to follow in the coming months—all offering savings of up to 70 per cent, all year round. 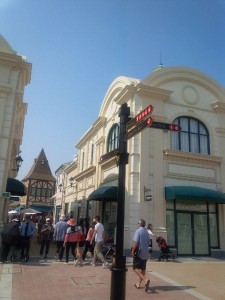 The centre is easily accessible via public transport, with Canada Line’s Templeton Station located across the street. Shoppers travelling from downtown Vancouver will be at the centre in just over 20 minutes, while those coming from the airport will arrive in three minutes. Travel between the airport and Templeton Station is free.

“The opening of our new centre marks a great day for Richmond and for the Lower Mainland, said Rob Thurlow, general manager of the McArthurGlen Designer Outlet. “Not only are we opening a new and exciting fashion destination, offering some of the best-loved names in fashion, we are also initially creating 600 new jobs at the centre, with further jobs created indirectly in the community, in particular in the tourism sector.”

The centre’s location adjoining the airport makes it an ideal shopping venue for the millions of tourists who visit the city each year.

A growing hub and gateway connecting Asia to the Americas, YVR is the second busiest airport in Canada, serving more than 19-million passengers in 2014. Voted Best Airport in North America by Skytrax for six consecutive years, YVR takes an innovative approach to sustainable airport growth.

“After years of planning and construction, it’s very exciting to welcome the community to McArthurGlen Designer Outlet Vancouver Airport,”said Craig Richmond, president and CEO, Vancouver Airport Authority. “Not only will the centre become a key tourism destination in our region, it’s also important to YVR’s role as a key economic driver. Through the designer outlet, we are creating jobs and a valuable source of non-aeronautical revenue that helps YVR, a not-for-profit organization, keep its airline costs low while delivering an exceptional airport experience.” 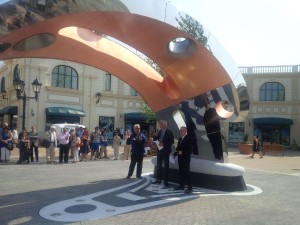 Integral to all YVR projects and McArthurGlen centres is a striking, accessible art feature that provides a gathering place and a moment of calm for customers. The centre is home to the latest work by acclaimed local contemporary visual artist Michael Nicoll Yahgulanaas. SEI is a powerful, 12-metre long sculpture of a whale breaching out of the water and provides a visually stunning focal point for the designer outlet.