Cascade Aerospace conducted the first test flight of a foreign military aircraft from its base in Abbotsford, British Columbia, on March 18, 2015. This was the beginning of the completion phase of the Mexican Air Force C-130K maintenance and modernization program, which began in 2014, and marked a significant milestone for the B.C. aerospace industry.

In 2014, engineering teams at Cascade Aerospace designed and installed a complete upgrade to the cockpit avionic system including the integration of the advanced digital Rockwell Collins Flight 2 avionics suite to meet twenty-first century navigation and communication requirements, as well as digital fuel quantity indication and engine instrument display systems.

This aircraft, one of two currently in Cascade’s hangar, has also had a new Auxiliary Power Unit (APU) installed and a Wing Availability and Sustainment Program conducted on it. 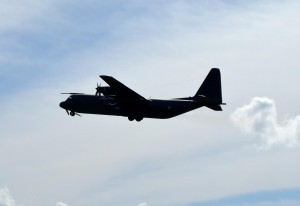 “I am extremely proud of the hard working engineers and mechanics here at Cascade Aerospace,” said Ben Boehm, Cascade’s Executive vice President and chief operating officer. “This test flight represents the culmination of a year of detailed design effort followed by countless hours of skilled craftsmanship to present the Mexican Air Force pilots with an airworthy plane. This test flight will lead to the delivery of a modernized and updated aircraft to the Mexican Government at a fraction of the cost of a new aircraft.”