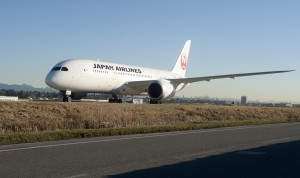 JAL’s Boeing 787-800 arrived at YVR in February 2014—the first Dreamliner to land at YVR as part of a regular scheduled service.

From the arrival of Dreamliner aircraft to parades, and a record number of passengers, YVR was busy in 2014. With the previous year now behind, YVR thanks its neighbours for hosting, joining in and participating at so many of the community events that were attended by the YVR team in 2014.

2. Steveston Salmon Festival
The annual Steveston Salmon Festival is one the most anticipated festivals to attend in the YVR community. Each year, the highly anticipated festival welcomes tens of thousands of visitors to the fishing village for a taste of the popular salmon barbecue and the Canada Day parade. In 2014, Craig Richmond, YVR’s president and CEO, and a team of aviators joined YVR’s crowd-pleasing crash-fire-rescue truck to hand out treats to the crowd.

3. Voted Best Airport in North America by Skytrax
YVR was named the Best Airport in North America for five consecutive years by Skytrax in 2014. The award is based on 9.8-million passenger surveys conducted in airports around the world and measures the results from 39 criteria that include comfort, efficiency, signage, transportation availability, passenger amenities and friendliness. The award was a testament to the hard work of YVR’s airlines, retail and business partners and their commitment to continuously improve YVR’s facilities and customer care. 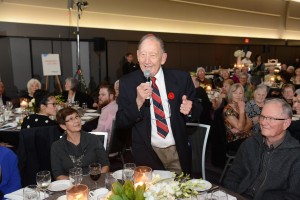 Doug Franklin (centre) was honoured for his 25 years of service as a YVR Green Coat and his contributions as an ambassador to the Lower Mainland and Canada at YVR.

4. Green Coats 25th Birthday
2014 marked the green coat volunteers’ 25th anniversary. For 25 years, YVR’s Green Coat volunteers have been welcoming and providing directions to customers at YVR with open arms and helpful smiles. Vancouver Airport Authority acknowledges that the Green Coat volunteers are one of the reasons why YVR was voted Best Airport in North America by Skytrax for five consecutive years in 2014.

5. New Baggage Carts
Sporting a sleek, upright, ergonomic design, YVR successfully rolled out 3,000 brand new baggage carts in 2014, with a little help from a tongue-in-cheek video on YouTube. The video received more than 100 likes and 35,000 views

With YVR having started 2015 with new service from Qantas to Sydney, Australia, new Air Canada rouge Palm Springs, California service and upcoming new Air France service to Paris in March 2015, all indications are that Canada’s second busiest airport will have another banner year.