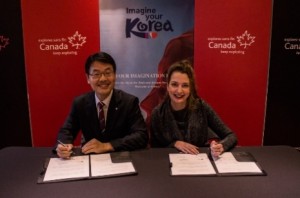 Canadian Tourism Commission and Korea Tourism Organization representatives sign a Memorandum of Agreement to boost tourism between the two countries.

The MOU is designed to broaden and deepen mutual understanding, as well as strengthen co-operation between the two countries in the tourism marketplace. It comes on the heels of the Canada-Korea Free Trade Agreement, which was signed in fall 2014.

“The intent of the agreement is to further enhance Canada’s long-time relationship to the South Korea market in light of our trade interests there,” said Jon Mamela, CTC’s chief marketing officer. “We’re confident that boosting tourism and sharing knowledge can only increase trade for both countries.”

Other key areas of the agreement will be an exchange of ideas around handling international events, product development, shared market intelligence and consumer trends.

The agreement, Canada’s first of its kind in Asia, is forecast to create thousands of Canadians jobs and boost the economy by $1.7-billion.

The South Korean tourism market has grown in strength during 2014. According to CTC’s latest Tourism Snapshot report, there was a 15.1 per cent rise in visitors to Canada in September 2014. That surge continued the 2014 trend for the Asian market, which has seen 11.2 per cent more South Korean consumers make Canada their destination of choice.

CTC’s research shows that just under a third of South Korean travellers to Canada are younger than 25. Driven by a strong student sector, this is one of the highest percentages for that demographic among CTC’s key markets.

Pleasure travel has been identified as the primary driver for South Korean consumers heading to Canada.

Visit yvr.ca for information on flights from Vancouver to Seoul, South Korea.