Don’t let a small bite turn into a health problem 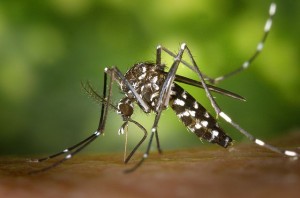 An Aedes albopictus mosquito (“tiger mosquito”), one of the mosquito species that can transmit chikungunya.

Are you turning up the heat this winter by travelling south? Don’t let a small bite ruin your vacation.

The Public Health Agency of Canada reminds Canadians heading south to protect themselves from mosquito bites that can spread diseases that cause illness, like chikungunya.

Chikun-what? Although it may sound like a tasty southern dish, chikungunya is far from pleasant. It’s a disease spread to humans through the bite of an infected mosquito. Its literal name means “which bends up” due to the fever and arthritis-like pain the infection causes in the joints. Most people recover after a few days, though in some cases, joint pain may persist for weeks or months.

Once found only in parts of Africa, Asia and the tropics, local transmission of chikungunya has spread to countries in Central and South America and in the southeastern United States.

While there’s currently no risk in Canada, the number of travel-related cases of chikungunya in Canada is on the rise.

“Travellers need to be vigilant when visiting areas where chikungunya is present,” said Canada’s Chief Public Health Officer Dr. Gregory Taylor. “No vaccine or medication is currently available to prevent or treat the infection. The best way to reduce the risk is to protect yourself from mosquito bites.”

The mosquitoes that transmit chikungunya are different from those encountered in Canada. While they can be found outdoors, they are typically found indoors, in small numbers and bite during the daytime. To protect themselves, travellers should:
• Wear light-coloured, long-sleeved, shirts and pants, closed-toe shoes and a hat.
• Use insect repellent containing DEET or Icaridin.
• Empty or get rid of water-filled containers that might support mosquito breeding in the areas where you stay.
• If possible, stay in a well-screened or completely enclosed air-conditioned room; otherwise, sleep under a bed net, preferably treated with insecticide.

Symptoms of chikungunya generally include fever and joint pain, along with fatigue, headache, nausea, vomiting, muscle pain and rash. They can take up to 12 days to appear, but usually begin within three to seven days after being bit by an infected mosquito.

If you develop these symptoms when you’re travelling or after you return, see a health care provider and tell them where you’ve been travelling or living.

For more information, consult the Agency’s Travel Health Notice on chikungunya on the Travel.gc.ca website.