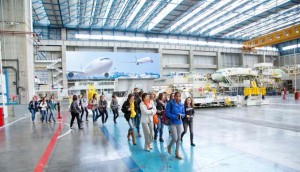 Airbus continued its policy of encouraging young girls to consider studying aeronautics by recently welcoming secondary school students to its Toulouse site for a day, giving them the opportunity to meet Airbus employees and learn more about the different professions in the aeronautical industry.

The goal of the Airbus’ program, “Elles du Futur – Girls for the Future of Aeronautics”, an initiative launched by Airbus in 2011, is to help make the aeronautical industry’s professions better known and encourage young girls to consider pursuing a career in the aeronautics industry.

After a presentation about Airbus and its professions, the students visit an Airbus aircraft final assembly line and meet female Airbus employees from a broad range of academic backgrounds to discuss their career paths and professions.

This is the third consecutive year that these awareness-raising actions have been carried out by Airbus. The previous editions were held on the Airbus sites in Nantes, Saint Nazaire and Toulouse as well as on its industrial sites in the United Kingdom, Germany and Spain.

These initiatives are in line with Airbus’ gender diversity policy, which aims to feminise these traditionally male professions. The diversity policy concerns all the Airbus entities worldwide and focuses on four major aspects: gender mix, inter-generational diversity, cultural and social diversity, as well as disabilities.