Atmosfair, a German climate protection organization, has ranked Air Transat as the most climate-efficient airline in North America for 2014. 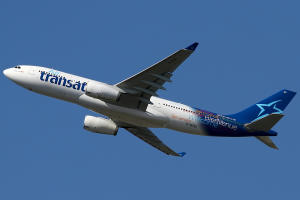 Established in 2004, the atmosfair Airline Index (AAI) compares and ranks the carbon efficiency of 193 airlines worldwide.

The formula used in the index contains information for every flight, aircraft type, engines, winglets, seating and freight capacity of an airline, as well as load factors for both passengers and co-loaded freight.

Using detailed sources from authorities and official statistics, specialized data service providers and computer models used by aircraft engineers, the CO2 emissions of the airline can be calculated at an error margin of less than two per cent.

Air Transat was the only North American carrier to appear in atmosfair’s global top 10 arlines of 2014. In addition, out of 125 international airlines Air Transat ranked fourth in the long-haul category and seventh on the global scorecard.

Stringent management of fuel consumption, adjustments to operations and investments in technology allow for measurable reductions of aircraft greenhouse gas emissions. Since 2003, Air Transat has developed, implemented and constantly improved a comprehensive fuel management program, which the airline estimates is responsible for a five per cent reduction in its fuel consumption.

According to the 2014 AAI, despite improved aircraft efficiencies and the use of newer aircraft, the total carbon emissions in the air traffic industry has risen by around three per cent, due to higher traffic volume. Traffic volume—passengers and kilometres—increased by almost five per cent.

For more information on Air Transat and its destinations, visit airtransat.ca.