By Editor on October 1, 2014 in Aviation Shows/Events 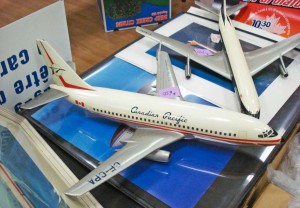 Collectibles such as this model of defunct airline Canadian Pacific will be seen at the October 18, 2014, Vancouver Aviation Show.

Canada’s rich aviation history lives on through the existence of many historical collectibles that celebrate all things aviation.

“We are extremely lucky to have some of the leading collectors in their fields participate in this show,” said show organizer Henry Tenby. “Many of this country’s great aviation pioneers from the 1950s are now passing on and, sadly, their collections of aviation mementos, photos, books, slides, models, brochures and what-have-you end up in the rubbish bin. Family members sometimes have no idea that an active aviation collectibles community exists in this country.”

One of the collections that was seen at the show was that of James Neilson, a recently retired commercial airline pilot from New Westminster, who has built up one of the country’s largest collections of Canadian airline wings and insignia. His collection spans from the founding bush airline days of the 1920s to current day.

Hamish Telford from Abbotsford specializes in historic airline and airport postcards and is also one of the country’s leading collectors in this area. The entire evolution of flight has been documented in the realm of postcards—from the Wright Brothers, to breaking the sound barrier, the mass development of airline networks in the 1950s, to space travel and current day. Telford had a special selection of his ultra rare, airline-issued card collection offered for sale and trade.

Old aviation books are another area of keen interest. Jerry Vernon and Jim Jorgenson of the Canadian Aviation Historical Foundation showcased old ephemera including a number of decades-old Jane’s “All the World’s Aircraft” tomes.

Other dealers offered a wide variety of vintage books, magazines and airline and manufacturer brochures from years past.

Vintage 35-millimetre kodachrome slides of aircraft, which are also highly sought after by aviation historians, journalists and collectors, were also available.