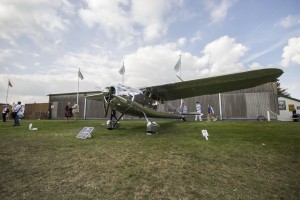 An exquisite Cessna 195 Business Liner was named the winner at the annual Freddie March Spirit of Aviation Exhibition presented by Eve at the 2014 Goodwood Revival in England.

The 1949 aircraft, which was the first to be produced by Cessna in all-aluminium form, came out on top as a panel of expert judges, which included TV presenter and keen aviator Carol Vorderman, political correspondent John Sergeant and pioneering Formula 1 and road-car designer Gordon Murray.

The judges agreed that the Dirk Sadlowski-owned Cessna was their favourite machine from a selection of 30 beautifully maintained aeroplanes and helicopters produced up to 1966 in this concours d’elegance of the sky.

Second place went to an example of the last biplane to be used by the RAF, a 1939 Gloster Gladiator owned by Stephen Grey.

The most famous of the other aircraft in the display was Rob Hield’s 1960 Hiller UH-12E4, the helicopter flown by Pussy Galore in the James Bond film Goldfinger and also used by Richard Burton and Elizabeth Taylor in film VIPs.

Also present were a 1942 Douglas C-47 Dakota, an example of one of the 2,000-strong group of aircraft that was used by the RAF, an American Aeronca TA Champ and a 1960s Czech Morovan-Zlin Z326, which braved a 10-hour journey to make it to the Revival.