Concorde MSN1 at its new home 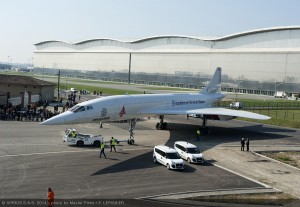 MSN1, one of the first Concorde jetliners built in Toulouse, France is transferred for its permanent display at the Airbus-supported Aeroscopia museum site at Toulouse-Blagnac Airport.

One of the first Concorde jetliners built at Toulouse, France has made its final voyage with the aircraft’s ground transfer to the Airbus-supported Aeroscopia museum site at Toulouse-Blagnac Airport.

Designated MSN1, this Concorde made its last flight in April 1985, returning to Toulouse after a career that included a full range of test and development activity.

The Aeroscopia museum where Concorde MSN1 will be permanently displayed has received funding from Airbus and its collection also will include one of the initial A300s—the cornerstone widebody jetliner in Airbus’ product line—as well as the no. 1 flight test A400M military airlifter.