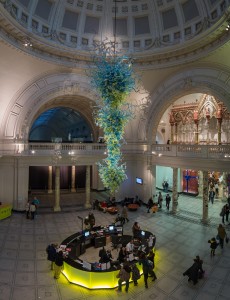 Victoria and Albert Museum—in 2000, an 11-metre high, blown glass chandelier by Seattle artist Dale Chihuly was installed as a focal point in its main entrance rotunda.

Hosting the 2012 Summer Olympics has given London a massive boost on the world stage, with huge numbers of international visitors flocking to the city. Figures released last month by the Office for National Statistics (ONS) show that a record 4.9-million people visited the city between July-September 2013.

For the first nine months of 2013 London welcomed nearly 12.8-million visitors, a 12 per cent increase compared to 2012. It is estimated that the final figures for 2013 will show the city welcomed more than 16-million overseas visitors in a year for the first time in history.

Visits from North America (800,000) were up 12.2 per cent in the third quarter of 2013, generating receipts of more than $1-billion, a boost of eight per cent over the previous year.

As London celebrates the record numbers of international tourists coming to the capital, the Mayor of London, Boris Johnson; actress Joanna Lumley; model and actress Twiggy; Michelin-star chef Gordon Ramsay; and two of the world’s most famous ballet dancers have been included in a new video marketing campaign to talk about what makes their city the greatest place on earth to visit.

Mayor of London Boris Johnson revealed there’s nothing better he likes doing than cycling to Hackney, east London, and then on to the Queen Elizabeth Olympic Park, admiring how London has more parks and green space than any other city in the world.

Chef, TV personality and restaurateur, Gordon Ramsay says the vibe, coolness and great restaurants in the city are second to nowhere else in the world. “Whenever we are returning from a long trip, the first thing we do is go out for a great curry on Brick Lane which is phenomenal,” said Ramsay. “I’ve been to India, but I find curries in Brick Lane better—you can’t beat a good London curry. Shall I let you in to the ultimate London secret? The best place for the ultimate fry-up is the 24-hour cafe on Fulham Road called Vingt-Quatre.”

Actress and human rights campaigner Joanna Lumley fell in love with London in the 1960s and adores hearing the chimes of Big Ben from her home in Stockwell, south London. She currently stars in Martin Scorsese’s blockbuster film The Wolf of Wall Street. Lumley says her hidden gem is Holland Park: “It’s got parterres [formal gardens], winding paths, statues, a little opera house, a beautiful restaurant and an orangery [along with] duck ponds and peacocks which roost in the trees.”

Actress and model Twiggy, who became the most famous face on the planet in the 1960s, says London is in her genes and that she loves visiting the Victoria and Albert Museum. Known for her fashion design sense, Twiggy reveals her passion for shopping in London. “Another great thing about London is shopping! What girl doesn’t love shopping, and London is the best!”