YVR to welcome All Nippon Airways to Canada

By Editor on January 9, 2014 in All Nippon Airways 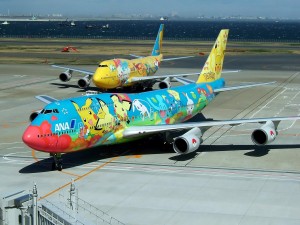 ANA planes have featured the likes of Pokemon, Woody Woodpecker and even a Panda on its liveries.

ANA’s new flight is expected to generate 356 jobs both at YVR and in B.C.’s hotels, restaurants, shops and tourist attractions, adding to the 1,494 local jobs already created by existing flights to Japan. In total, YVR’s three daily flights to Japan will generate an estimated $64.8-million in wages, $36.1-million in taxes and $99.3-million in added Gross Domestic Product for the province.

“This new service will offer B.C. businesses more options to reach customers in central Tokyo, but also throughout Japan and Asia thanks to ANA’s strong domestic and international networks,” said Craig Richmond, president and CEO, Vancouver Airport Authority. “ANA’s decision to fly to YVR further strengthens our position as North America’s gateway of choice to the Asia-Pacific region.”

With more than 23,600 people working on Sea Island, YVR is one of British Columbia’s key economic and employment generators.

The new daily service to HND is made possible by recent liberalization to Canada’s air-service agreement with Japan. It will increase YVR’s overall capacity to Tokyo by 30 per cent, complementing existing daily service to Narita International Airport (NRT), which is located approximately 60 kilometres from Tokyo’s downtown core. Originally the main international airport for Tokyo until NRT opened in 1978, HND is located just 15 kilometres from Tokyo’s core. It is the second busiest airport in Asia and the fourth busiest in the world.

“We are very pleased to announce the launch of long-haul international services from Tokyo to Vancouver,” said Osamu Shinobe, president and CEO, ANA. “Vancouver will be the first destination in Canada for ANA, and we are confident that passenger demand will be high, not only in Japan but in other Asian cities.”

Japan and British Columbia have a long and significant history of cultural and economic links. As the world’s third-largest economy, Japan offers B.C. businesses many opportunities to increase exports by taking advantage of its high demand for energy resources, raw materials, seafood and international education. In 2012, $101-million worth of B.C. exports left YVR for Japan, making it the third largest market, by value, served from the airport.

For its Vancouver run, ANA will operate a Boeing 767-300 with seating capacity for 214 people.

The new service to HND will complement YVR’s existing flights to Narita International Airport (NRT). The daily flight will arrive at YVR at 2:55pm and depart at 4:55pm.

Vancouver e youkoso! That translates in English to Welcome to Vancouver!