Oahu bans smoking at the beach 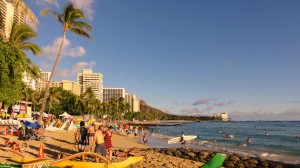 Waikiki Beach on the Hawaiian island of Oahu is one of the best known beaches in the world.

Municipal golf courses are excepted from the ban.

It is already illegal on Oahu to smoke within six metres of entrances to stores, restaurants, bars and other workplaces on Oahu.

E-cigarettes aren’t covered by the ban and can still be used on Oahu beaches.

First time offenders would face fines of $100. Fines for additional offenses escalate up to $500.

Another smoke-free beach area is the Caribbean island of Jamaica, which has also banned smoking tobacco on its beaches.