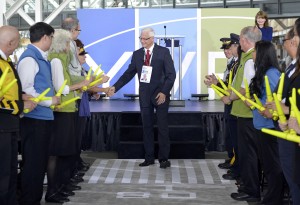 A dedicated team of Airport Authority Directors undertook a global recruitment effort to find the ideal candidate to fill the position.

As a community-based organization, the Airport Authority consulted extensively with local stakeholders to build a vision for its next leader. Among the most important requirements for a new CEO was extensive aviation industry expertise, a working understanding of the business of airports and a strategic vision for writing the next chapter of YVR’s story.

“Like YVR itself, our new president & CEO is a home-grown success story,” said Jordan. “A unique mix of work experience, skills, education and values amassed over a lifetime in aviation—including a decade’s worth of experience as a Canadian military fighter pilot—make Craig a great fit for a great job.”

A senior airport executive, Richmond brings a wealth of international airport experience back to YVR from positions with Vantage Airport Group as CEO of six different airports in three different countries, each with its own political, financial and cultural considerations.

Prior to his international postings, Richmond served as vice president, operations at YVR, during which time he led the operational response to the events of 9/11 and SARS and introduced new airfield safety technologies. From building route capacity and increasing passenger traffic to delivering multi-million dollar capital improvement programs and leading integrated aviation crisis response, every aspect of Richmond’s career has added depth and breadth to the leadership skills that will serve YVR’s future development well.

“Not many people can say that the job they wished for as a child is the job they will actually one day have as an adult,” said Craig Richmond, president & CEO, Vancouver Airport Authority. “To be back in Vancouver at what I believe is the best airport in the world is a dream come true. I look forward to working with the exceptional team of Airport Authority employees. Together with the 23,000 people who work at the airport we will continue to create an airport that shows our pride in B.C., that British Columbians can be proud of and that every passenger can enjoy.”

With a focus on innovation, sustainability and teamwork toward developing YVR’s potential as a key global gateway, Richmond will continue to shape and enhance YVR’s reputation as North America’s top airport.

Richmond is Vancouver Airport Authority’s third president & CEO since management of YVR transferred from the federal government to a local, community-based authority in 1992. He assumes responsibility from Larry Berg, during whose 15-year leadership of the Airport Authority YVR earned its international reputation for airport excellence.