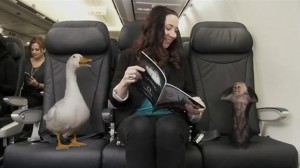 WestJet allows animal passengers to roam free on board its aircraft in a scene from the airline’s April Fool’s Day video.

April Fool’s Day is known for the execution of a variety of hoaxes and practical jokes by individuals, newspapers and organizations. And this year was no exception, with companies from Google to Virgin Airlines posting what appeared to be serious stories.

Google kicked off the April 1 prank-pulling day when it announced it would be shutting down YouTube at the stroke of midnight. Google also introduced Google Nose, an “olfactory knowledge feature” that “seamlessly connects scent to search.”

Twitter announced it would start charging users for vowels. Consonants and the letter ‘Y’ would be free, but “premium” service would cost $5 per month.

Calgary-based airline WestJet, which has gained renown in the travel industry for its corporate-sanctioned April Fool’s Day hoaxes, announced the easing of restrictions on pets in the cabin. All WestJet flights would now allow for any type of animal to travel in the cabin provided it fits safely on board the aircraft. Further, the airline would no longer require animals to be kept in kennels while on board the aircraft. 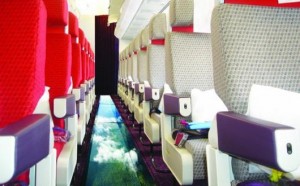 Meanwhile, Virgin Airlines said it was introducing a glass-bottomed plane, which would let passengers enjoy “stunning landscapes from the comfort of their seats.” CEO Sir Richard Branson, who made the announcement on his blog, is said to have personally funded the project that engineers have been secretly working on for several years.

China’s state broadcaster, CCTV, ran the story as odd—but real—news, assuring viewers that they need not worry about safety on the aircraft since the see-through bottom would be made of aviation-grade glass.