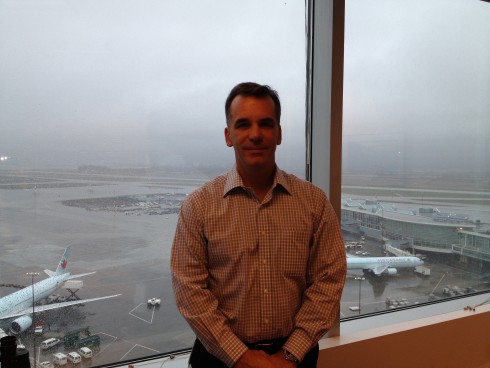 Brent Bell has one of the best views at Vancouver International Airport (YVR). Situated in YVR’s control tower, he has been manager of the tower since 2007. Bell started working at YVR for NAV CANADA in 1985. During his time, he has seen and been a part of many of the exciting events that have helped shape the airport and Metro Vancouver.

In his current position, Bell is responsible for ensuring the airport’s control tower continues to operate as one of the top towers in Canada. Given high traffic volumes, the complexity of the airspace in and around YVR and a solid safety track record, the tower regularly earns top ranking.

One of the reasons air traffic control at YVR is so challenging is due to the unique needs presented by the airport’s location. YVR’s proximity to the Fraser River creates a number of distinct challenges not encountered by other Canadian airports. In the tower, air traffic control has a specific position dedicated to overseeing the South Terminal. The sole responsibility is managing aircraft operating under visual flight rules, including helicopters from the three helipads on the airport’s south side and float planes that use the Fraser River as its runway. That responsibility also extends to float planes that operate within YVR’s tower zone.

YVR also experiences more than its fair share of fog, adding an additional layer of complexity. In good weather, air traffic controllers have one of the best views of the airport and surrounding land, but fog limits almost all visuals.

“The level of collaboration and cooperation that exists between Vancouver Tower and the Airport Authority is unique amongst airports and air navigation service providers in Canada and around the world,” said Brett Patterson, director, airside, Vancouver Airport Authority. “Brent’s leadership and vision have resulted in YVR having an enviable safety record that is amongst the best in Canada and the world.”

A few key events stand out to Bell during his career at YVR.

1986: One year after he started at NAV CANADA, Expo 86 was held throughout the Lower Mainland. Bell remembers the time as a period of celebration; some NAV Canada employees even got to ride in an old Concorde.

1995: On October 19, Bell had just relieved a fellow air traffic controller in the South Tower position when the PA system announced that a DC-10 was having difficulty with take-off. Bell pushed the crash alarm for the first and only time in his career. He remembers experiencing everything in slow motion as he continued to push the crash alarm, thinking it hadn’t worked the first time. Thankfully, a serious crisis was averted and all passengers and crew escaped with no serious injuries.

1996: The new control tower opened, and YVR’s parallel runway and terminal expansion were completed. Not only did air traffic controllers get a much better view, but they also got a significant upgrade to technology in the tower.

2010: The Vancouver 2010 Winter Olympic Games saw an extraordinary sense of teamwork across the airport community. Bell and his team worked with Vancouver Airport Authority and many other partner organizations to see how many aircraft they could welcome to the airport during the month-long Games.

Vancouver International Airport’s control tower has one of the best safety records in the country. Bell jokes that if there was an air traffic control competition, his team would enter. He doesn’t elaborate further—but these guys might just win!