Preparing for snow begins in summer 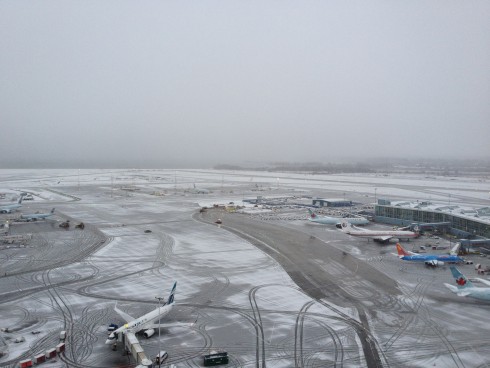 YVR used up to 80 pieces of snow-removal equipment on its runways, taxiways and aprons during last month’s near-record one-day snowfall.

Although most Metro Vancouver residents spend the majority of their year preparing for and managing lashings of rain, YVR spends a significant amount of time preparing for the possibility of snow.

Beginning each summer, Airport Authority staff begins preparations for the winter season by reviewing and revising plans, preparing specialized equipment, ordering supplies and briefing staff and contractors in order to ensure YVR is ready for any inclement weather.

On December 19, a near-record one-day snowfall occurred at YVR which tasked staff and partners with enacting the snow-preparedness plan.  During a large snowfall like the one experienced on December 19, YVR uses up to 80 pieces of snow-removal equipment to keep runways, taxiways and aprons safe for aircraft and passengers. Many different pieces of equipment are involved in this process.

While the operations team and partners worked to ensure the safety and security for aircraft and passengers on the airfield, staff, partners and Green Coat Volunteers worked to minimize the disruptions and promote a festive atmosphere in the terminal. Some travellers experienced delays on December 19 due to the unexpected magnitude of the snowfall. The patience of these passengers was appreciated by Airport Authority staff and partners who worked diligently to help get them to their destinations in time for the holidays.

In 2013, YVR will continue to revise its snow preparedness plans in anticipation of the next snowfall.  But more importantly, YVR is also considering removing Let it Snow from its holiday in-terminal music selection!